Petition in Support of Archbishop Léonard 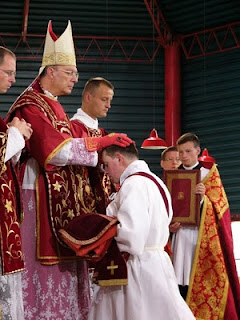 After the recent appointment of Msgr. Léonard as archbishop of Mechlin-Brussels (as reported on the NLM here and here), he has come, as was sadly to be expected, under heavy assault by the secular press for his fidelity to the Magisterium of the Church. As Fr Tim Finigan points out at The Hermeneutic of Continuity (where he also links to a very interesting interview Msgr. Léonard gave in 2006: "The Belgian Church has been too passive"), there is now a Petition in Support of Archbishop Léonard which you may sign here. Please consider doing so.

The archbishop himself has in the meantime announced his priorities for his new charge, which prominently inlcude (among other important points, such as a systematic personal visitation of the parishes, to which Msgr. Léonard dedicated 20 months of the first five years of his pontificate at Namur) the importance of a dignified celebration of the holy liturgy, "faithful to the great tradition of the Church", in order that the church of Belgium be ever more a praying and adoring church.