News of the Missionaries of Divine Mercy 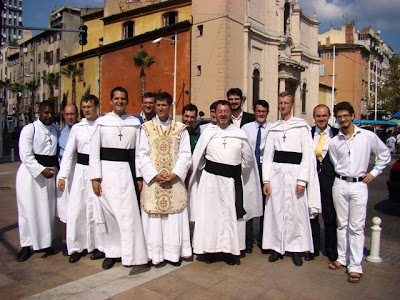 It has been a while since we have last mentioned the Missionaries of Divine Mercy, a community attached to the usus antiquior founded by Msgr. Dominique Rey of Fréjus-Toulon, that paragon of French bishops (see earlier posts here and here). Now Berenike of Laodicea has found a very good interview with their founder, Fr Fabrice Loiseau (the interview is in French, but even if you don't understand the language, interspersed are some nice images of the community):

The community also has a very well done website, where they explain their origins.

Berenike has made a translation which I reproduce here:

Our community was born of the meeting of two men, two pastors: Dominique Rey, bishop of the diocese of Frejus-Toulon, and abbé Fabrice Loiseau, then a priest of the FSSP. The bishop was looking for a community attached both to the old rite and to diocesan unity, the priest was seeking that same unity and the possibility of being profoundly missionary through the spirituality of the Divine Mercy.

After many meeting in the diocese, including evangelisation camps on the beaches of Var [region of France], the project of the community was born as a response to these aspirations. Frs Jean-Raphaël Dubrule and Eloi Gillet, then seminarians, joined the project and completed their formation at the diocesan seminary at La Castille. Other young men joined the community and became diocesan seminarians at La Castille, where they prayed the liturgy of Paul VI during the week and the traditional liturgy at the weekend in the parish, and during their apostolate.

The Society of the Missionaries of the Divine Mercy was born in September 2005, as an association of diocesan right attached to the diocese of Frejus-Toulon.

- witness to Mercy, as Christ revealed it to sr Faustina

- a great eucharistic devotion, with a particular attachment to the celebration of the liturgy in the rite of St Pius V, in the spirit of the motu proprio Summorum Pontificum

- a missionary zeal for the New Evangelisation, especially among the muslims.

What I find especially appealing about this young community - presently consisting of three priests of the diocese of Fréjus-Toulon, seven seminarians, three youth in propaedeutic formation and three in discernment - is their strong missionary impetus, which nicely dispels the caricature sometimes made of those attached to the usus antiquior, i.e. being solely focused on the liturgy to the detriment of apostolic activity. As the Missionaries of Divine Mercy demonstrate, the two go hand in hand, and true and fruitful apostolic activity cannot but be rooted in and flow from the worship of Almighty God.

The French Catholic TV channel KTO has made a documentary about three priests carrying out unusual apostolates among people with little or not contact with the Church, one of which is Fr Loiseau (the other ones belonging to the Servi Jesu et Mariæ, another community which celebrates the Extraordinary Form, and the Community of St. John). While some of you may find some aspects of the apostolic activities shown here surprising or even questionable, at least the activities of the Missionaries of Divine Mercy are I think irreproachable, and indeed, in my opinion, edifying and even moving. You can watch the documentary (in French) at this link: