BELIEVING IN GOD FOLLOWING IN THE FOOTSTEPS OF ABRAHAM

Vatican City, 23 January 2013 (VIS) - "I believe in one God", the first article of the profession of faith that accompanies our lives as believers, was the theme of Benedict XVI's catechesis during this morning's general audience. This sentence is "a fundamental affirmation, seemingly simple in essence, but which opens us to the infinite world of a relationship with the Lord and with His mystery. Believing in God means adherence, … acceptance, … and obedience … Faith is a personal act and a free response... Being able to say that you believe in God is thus both a gift and … a human responsibility in an experience of dialogue with God who, out of love 'speaks to men and women as friends'."
Where can we hear the voice of God who speaks to us? "Fundamentally," the Pope said, in "Sacred Scripture, … which speaks to us of faith … narrating a story in which God carries out His plan of redemption and draws near to humanity through … persons who believe in Him and who entrust themselves to Him." One of these persons is Abraham, "the first great role model in speaking about faith in God." Abraham, who was able to leave his homeland, trusting in God alone and His promise, is considered the "father of all believers". His was a leap in darkness, "but the darkness of the unknown is illuminated by the light of a promise. … In the divine plan he was destined to become 'father of a multitude of nations' and to enter a new land to live in."
"Faith," the pontiff continued, "leads Abraham along a paradoxical path. He will be blessed, but without the visible signs of blessing. He receives the promise of becoming a great nation, but has a life marked by the sterility of his wife, Sarah. He is led to a new land, but will have to live there as a foreigner." … Nevertheless, "Abraham is blessed because, with faith, he is able to discern the divine blessing, going beyond appearance, trusting in God's presence even when His paths seem mysterious."
That is why, "when we affirm that 'I believe in God', we are saying, as does Abraham, 'I trust in You. I entrust myself to You, Lord'. … Saying 'I believe in God' means basing my life on Him, letting His Word guide me every day in my concrete choices, without fear of losing something of myself. … Abraham, the believer, teaches us faith and, like a foreigner on earth, points out our true homeland. Faith makes us pilgrims on earth, situated in the world and in history, but on the path toward our heavenly homeland. Believing in God thus makes us heralds of values that often do not coincide with fashion or the opinion of the moment. … In many societies, God has become the 'great absentee' and many idols have taken His place, above all the desire for possessions and the autonomous 'I'. Also, the significant and positive progress in science and technology has given humanity the illusion of omnipotence and self-sufficiency and a growing selfishness has created many imbalances in personal relationships and in social behaviour."
"And yet," the Holy Father emphasized, "the thirst for God is not quenched and the Gospel message continues to resonate through the words and deeds of many men and women of faith. Abraham, the father of all believers, continues to be the father of the many children who are willing to walk in his footsteps and who make their way in obedience to the divine call, trusting in the Lord's benevolent presence and accepting His blessing in order to become a blessing for all. It is the blessed world of faith to which we are all called, to walk without fear following the Lord Jesus Christ."
"Affirming that 'I believe in God', then, compels us to leave, to continuously go out of ourselves just as Abraham did, in order to bring the certainty that comes to us from faith into our daily realities. It is the certainty of God's presence in history, even today; a presence that brings life and salvation."
You can find more information at: www.visnews.org and www.vatican.va 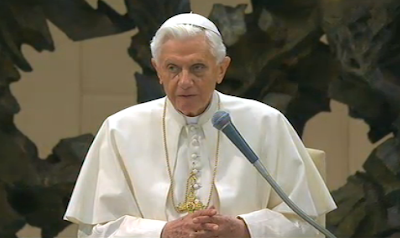